How to Install MySQL from Generic Binaries on Unix/Linux

This section covers the installation of MySQL from a compressed tar file binary distribution.
For other platform-specific package formats.

1>> "How to Get MySQL."
MySQL compressed tar file binary distributions have names of the form mysql-VERSION-OS.tar.gz,
where VERSION is a number (for example, 5.5.21), and OS indicates the type of operating system
for which the distribution is intended (for example, pc-linux-i686 or winx64). 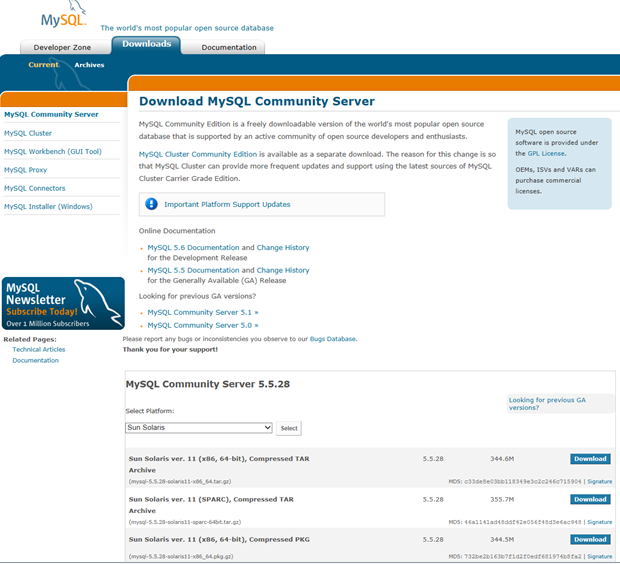 To install MySQL from a compressed tar file binary distribution, your system must have GNU gunzip to uncompress the distribution and a reasonable tar to unpack it. If your tar program supports the z option, it can both uncompress and unpack the file.

GNU tar is known to work. The standard tar provided with some operating systems is not able to unpack the long file names in the MySQL distribution. You should download and install GNU tar, or if available, use a preinstalled version of GNU tar.

Usually this is available as gnutar, gtar, or as tar within a GNU or Free Software directory, such as /usr/sfw/bin or /usr/local/bin. GNU tar is available from

If you have previously installed MySQL using your operating system native package management system, such as yum or apt-get, you may experience problems installing using a native binary. Make sure your previous MySQL previous installation has been removed
entirely (using your package management system), and that any additional files, such as old versions of your data files, have also been removed. You should also check the existence of
configuration files such as /etc/my.cnf or the /etc/mysql directory have been deleted.

On Unix, to install a compressed tar file binary distribution, unpack it at the installation location you choose (typically /usr/local/mysql). This creates the directories shown in the
following table. 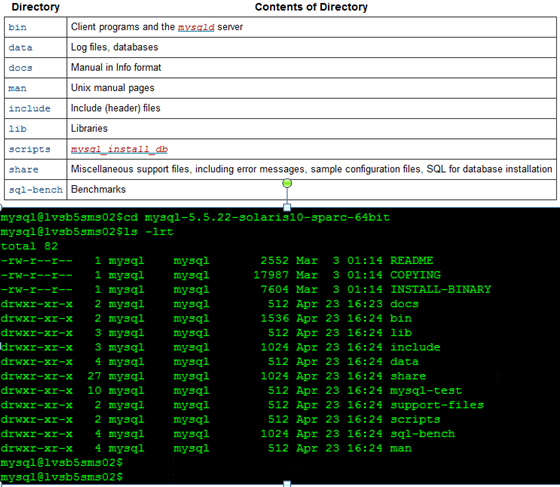 Debug versions of the mysqld binary are available as mysqld-debug.
To compile your own debug version of MySQL from a source distribution,
use the appropriate configuration options to enable debugging support.

4>> “To install and use a MySQL binary distribution, the basic command   sequence looks like this:”

5>> A more detailed version of the preceding description for  installing a binary distribution follows.


This procedure assumes that you have root (administrator) access to your system. Alternatively, you can prefix each command using the sudo (Linux) or pfexec (OpenSolaris) command. The procedure does not set up any passwords for MySQL accounts.

If your system does not already have a user and group for mysqld to run as, you may need to create one. The following commands add the mysql group and the mysql user. You might want to call the user and group something else instead of mysql. If so, substitute the appropriate name in the following instructions. The syntax for useradd and groupadd may differ slightly on different versions of Unix, or they may have different names such as adduser and addgroup.

Note:==
Because the user is required only for ownership purposes, not login purposes, the useradd command uses the -r option to create a user that does not have login permissions to your server host. Omit this option to permit logins for the user (or if your useradd does not support the option).

5.2>> Obtain and Unpack the Distribution
Pick the directory under which you want to unpack the distribution and change location into it. The example here unpacks the distribution under /usr/local. The instructions, therefore, assume that you have permission to create files and directories in /usr/local. If that directory is protected, you must perform the installation as root.

The tar command creates a directory named mysql-VERSION-OS. The ln command makes a symbolic link to that directory. This enables you to refer more easily to the installation directory as /usr/local/mysql.
f your tar does not have z option support, use gunzip to unpack the distribution and tar to unpack it. Replace the preceding tar command with the following alternative command to uncompress and extract the distribution:

The remainder of the installation process involves setting up the configuration file, creating the core databases, and starting the MySQL server "Post installation Setup and Testing."
Note:==
The accounts that are listed in the MySQL grant tables initially have no passwords. After starting the server, you should set up passwords.

After installing MySQL, there are some issues that you should address. For example, on Unix, you should initialize the data directory and create the MySQL grant tables. On all platforms, an important security concern is that the initial accounts in the grant tables have no passwords. You should assign passwords to prevent unauthorized access to the MySQL server. Optionally, you can create time zone tables to enable recognition of named time zones.

After installing MySQL on Unix, you must initialize the grant tables, start the server, and make sure that the server works satisfactorily. You may also wish to arrange for the server to be started and stopped automatically when your system starts and stops. You should also assign passwords to the accounts in the grant tables.

The following procedure describes how to initialize the grant tables (if that has not previously been done) and start the server. It also suggests some commands that you can use to test whether the server is accessible and working properly.

After you complete the procedure and have the server running, you should assign passwords to the accounts created by mysql_install_db and perhaps restrict access to test databases.

In the examples shown here, the server runs under the user ID of the mysql login account. This assumes that such an account exists. Either create the account if it does not exist, or substitute the name of a different existing login account that you plan to use for running the server. For information about creating the account.
Change location into the top-level directory of your MySQL installation, represented here by BASEDIR:

BASEDIR is the installation directory for your MySQL instance. It is likely to be something like /usr/local/mysqlor /usr/local. The following steps assume that you have changed location to this directory.


You will find several files and subdirectories in the BASEDIR directory. The most important for installation purposes are the bin and scripts subdirectories:


The bin directory contains client programs and the server. You should add the full path name of this directory to your PATH environment variable so that your shell finds the MySQL programs properly.

contents will be owned by root. Change its ownership to mysql by executing the following commands as root in the installation directory. The first command changes the owner attribute of the files to the mysql user. The second changes the group attribute to the mysql group.

If necessary, run the mysql_install_db program to set up the initial MySQL grant tables containing the privileges that determine how users are permitted to connect to the server. You will need to do this if you used a distribution type for which the installation procedure does not run the program for you.

Typically, mysql_install_db needs to be run only the first time you install MySQL, so you can skip this step if you are upgrading an existing installation, However, mysql_install_db does not overwrite any existing privilege tables, so it should be safe to run in any circumstances.
The exact location of mysql_install_db depends on the layout for your given installation. To initialize the grant tables, use one of the following commands, depending on whether mysql_install_db is located in the bin or scripts directory:

It might be necessary to specify other options such as --basedir or --datadir if mysql_install_db does not identify the correct locations for the installation directory or data directory. For example:

The mysql_install_db script creates the server's data directory with mysql as the owner. Under the data directory, it creates directories for the mysql database that holds the grant tables and the test database that you can use to test MySQL. The script also creates privilege table entries for root and anonymous-user accounts. The accounts have no passwords initially.
Describes the initial privileges. Briefly, these privileges permit the MySQL root user to do anything, and permit anybody to create or use databases with a name of test or starting with test.

It is important to make sure that the database directories and files are owned by the mysql login account so that the server has read and write access to them when you run it later. To ensure this if you run mysql_install_dbas root, include the --user option as shown. Otherwise, you should execute the script while logged in as mysql, in which case you can omit the --user option from the command.

If you do not want to have the test database, you can remove it after starting the server, using the instructions.

Most of the MySQL installation can be owned by root if you like. The exception is that the data directory must be owned by mysql. To accomplish this, run the following commands as root in the

If the plugin directory (the directory named by the plugin_dir system variable) is writable by the server, it may be possible for a user to write executable code to a file in the directory using SELECT ... INTO DUMPFILE. This can be prevented by making plugin_dir read only to the server or by setting --secure-file-priv to a directory where SELECT writes can be made safely.

If you do not copy one of the standard configuration files, the MySQL server will be started with the default settings.

If you want MySQL to start automatically when you boot your machine, you can copy support-files/mysql.server to the location where your system has its startup files. More information can be found in the mysql.server script itself.

It is important that the MySQL server be run using an unprivileged (non-root) login account. To ensure this if you run mysqld_safe as root, include the --user option as shown. Otherwise, you should execute the script while logged in as mysql, in which case you can omit the --user option from the command.

For further instructions for running MySQL as an unprivileged user.

If the command fails immediately and prints mysqld ended, look for information in the error log (which by default is the host_name.err file in the data directory).
If you neglected to create the grant tables by running mysql_install_db before proceeding to this step, the following message appears in the error log file when you start the server:

Use mysqladmin to verify that the server is running. The following commands provide simple tests to check whether the server is up and responding to connections:

The output from mysqladmin version varies slightly depending on your platform and version of MySQL, but should be similar to that shown here:

To see what else you can do with mysqladmin  invoke it with the --help option.
Verify that you can shut down the server:

Verify that you can start the server again. Do this by using mysqld_safe or by invoking mysqld directly. For example:

If mysqld_safe fails:=
Run some simple tests to verify that you can retrieve information from the server. The output should be similar to what is shown here: 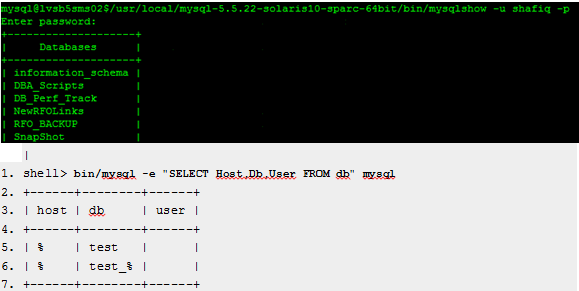 HELFUL AND WANT TO SAY THANKS?